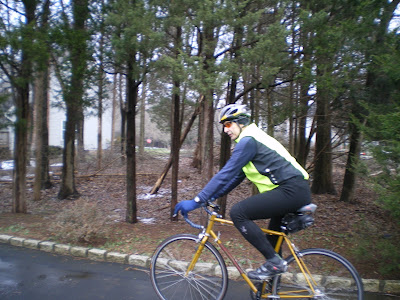 Welcome to December in the wonderful eastern US. This has been one of the coldest months I can remember. Every weekend has just been insufferably cold, wet, or both. As the end of the month neared I was extremely nervous about getting this ride in. My friends Paul and Jon managed to get their December R12 requirement fulfilled on the second Saturday of the month. Originally, we had hoped to all ride together on the Sunday of that weekend. But, the forecast called for freezing rain, snow, or both. I encouraged them to take advantage of the dry day on Saturday, even though I was obligated to work. Unfortunately, I would not be able to join them. I was glad they decided to go on Saturday as freezing rain did fall on that Sunday morning. The conditions would not have lent themselves to a long ride, or any road ride for that matter. I targeted the following Sunday for my ride. Paul put me together with another rider who was scheduled on the same day so we would both have company. A major snow storm hit the night before dashing that opportunity. I waited somewhat anxiously as the days went by for my opportunity to present itself. Finally with just a few days left in the month I noticed a stunning forecast for Sunday December 27th. The temperature range was predicted to be 32F - 48F with some sun. That sounded like a winner to me. I decided to use the PBP route again as my friend Paul, the route owner, suggested the openness of the course should have allowed any residual snow to melt. As the day neared my friend Al agreed to join me. He has yet to finish a 200k, although he has started a couple of them with me.

Now for the twist in the plot. I decided to give the ride a try on my Salsa Caseroll upright in lieu of Mellow Yellow. I've been doing some commuting, and other rides, on my DF bikes for a couple of months, but I still considered Mellow Yellow my brevet bike. None the less I've had this overpowering urge to try a long ride on the Salsa. I was quite nervous about my ability to ride this bike 129 miles given that my longest distance on it year to date is 40 miles. Even the night before as I lay in bed waiting to fall asleep I considered changing my mind and taking the recumbent. Once morning arrived I stayed true to my plan and loaded the Salsa in the car and headed for the start. No turning back now.

While waiting at the starting control, the Dunkin Donuts in Princeton Junction, another rider rode in. It was not Al. I recognized Christine from our local rando rides. She was also doing the permanent to keep her R12 going. Al arrived a few minutes later. We agreed to ride as a group. We had coffee then the three of us pushed off towards the first control in Belmar. The sun was just starting to come up as we set out on the quiet streets heading southeast. There was a light to medium tail wind. The temperature, in the thirty's, was quite tolerable. We made steady progress for the first 15 miles, then I rolled through some broken glass causing a flat on the rear. With Chris and Al's help the offending glass shard was removed. The hole in the tire was large enough that we decided to use a boot. We inserted a new tube, re-pressured with a quick fill, then struggled but succeeded in getting the rear wheel back on. Off we go again smoothly sailing along through the New Jersey countryside. After another fifteen miles I felt the rear tire getting soft. I stopped to pump it up a bit hoping the leak was a slow one and we could make the control in Belmar before addressing the issue further. Unfortunately, that plan went out the window when after about a mile I felt the rim against the pavement. Flat tire change number #2! We could find nothing puncturing the tire, but there was a slice in the tube. I assumed it was a faulty seam and replaced it with my last spare tube. Back underway we soon pass through Wall Township and approach the outskirts of Belmar. In the final mile to the control I notice the rear tire feeling wonky. Sure enough it is almost completely flat. Again! I make it into the control, the Dunkin Donuts on Ocean Ave, and pump the tire using a mini-pump. I can hear air leaking out rather rapidly. I am telling Christine that basically I think I'm screwed unless I can find a nearby bike shop that is open. A couple of guys standing outside the DD overhear the conversation and inform me of a bike shop 1/2 mile away that is open right now. Chris calls the shop to confirm they will help me. They agree to help and she tells them I am on my way. We agree to try and meet up at the next control in New Egypt. After pumping as much air into the tire as I can I set off for DJ's Cycles. Once there they immediately put my bike on the stand. Given that I can't spare the time of any more flat tires I ask them to please just replace the tube and tire with brand new. The whole job takes about a half hour. While I'm waiting I adjust some layers of clothes, as the temperature has really come up to almost 50F. I eat a peanut butter sandwich which I had in my pack and procure some water from the market next door. After paying the bill I head out to resume the ride from the Belmar control.

Passing the Dunkin Donuts I continue south on Ocean Blvd. After a couple of miles the route turns to the west. I immediately feel a strong head wind after making the turn. Basically, I am mostly into the wind for the next thirty-five miles. There are a couple of minor climbs on this section which I thoroughly enjoyed because they provided some wind block. Otherwise it was a relentless grind all the way to the control. About half-way through I had to have a gel and energy bar to keep turning the pedals. Most of the time my forward progress was between 12 and 14 miles per hour. Only occasionally did I see the computer register a speed of 15 or above. I felt a profound sense of relief when I reached Main Street in New Egypt. I was even more elated when I spied Al and Christine at the Wawa control. They said they hadn't been there very long, so I grabbed coffee and a snack before heading out with them for the next stretch to Pemberton.

The wind would continue on this section but fortunately it was only a fifteen mile run to the control. We pass through the Fort Dix/Maguire Military installation and into the town of Browns Mills. We are rolling smoothly. My new rear tire appears to have ended my mechanical difficulties. We pass through New Lisbon and Pemberton Heights at which point we turn to the north. The control, another Wawa is quickly reached after the turn. We are now at mile 95. The total route distance at 129. A quick coffee is all I need. We are soon off to continue our northerly trek towards the next stop in Cranbury.

The wind is far more tolerable in this direction. In addition, there are a few small hillocks to break up the terrain a bit. I enjoy small hills or rolling terrain in the latter part of a longish flat ride. It feels good to work the legs a bit differently. I seem to gain energy and strength at a point when I should be tiring. I am also amazed that I've done this well on the upright bike. Frankly, I was in doubt that I would make it asking my wife to please be available in case I needed to be picked up off the route. I may wind up hurting for the next couple of days. But, at mile ninety I am feeling like King Kong. Also, I am impressed with my riding companions. Christine is a very confident and steady rider. She maintains a constant pace and appears to be in a comfortable zone all the time. As for Al, I am delighted he has made it this far. Long rides are not typically his cup of tea. He appears determined to finish this time. I have little doubt that he will. If he is doing any suffering he is keeping it to himself as I've not heard a single complaint. Darkness creeps up on us as we approach the small town of Chesterfield. Traffic is light, the weather is cooler, but quite tolerable, and we continue to make good time. We cross over I-195 just past Allentown. Then the NJ Turnpike just prior to Hightstown. Our next control is just six miles to the north. We cross US-130 and arrive at the pizza shop in Cranbury, which is the penultimate control. We decide to treat ourselves to a sit down meal. We enjoy slices of pizza and hot soup. The mood is jubilant as we all know the finish is but 7 short miles away and there is little that could prevent us from making it.

We step out of the Pizza shop into the chilly night air. It is starting to feel much colder. But, with just seven miles to the finish I'm not concerned. I've ridden in far colder this year. This short section is quite familiar to me as I've ridden through here literally hundreds of times. I don't bother turning my cue sheet as I could probably navigate these roads blindfolded. The cold is a bit more penetrating but given the short period of time I have to endure it I'm sure I can manage. Once I start smelling the barn I have trouble maintaining an easy pace. I always pour it on to finish quickly ending the ride on a high note. In the last few miles I kept distancing myself from my companions. I then back off, soft pedal for a bit, to let them catch up. We regrouped for the last time just a hundred yards from the Dunkin Donuts control. Pulling up in front at the same time. I'm feeling very pleased to have completed this ride overcoming the mechanical issues in the early miles and riding a bike I wasn't sure I could go the distance on. Christine was also happy to have gotten in the December R12 ride leaving only two remaining months for her. As for Al, although he was quite stoic about it he had to be thrilled to have completed his first 200k.

I definitely was sore and tired for a few days after the permanent. The muscle set used for upright riding is different from the recumbent. My quads and calves were very tender requiring a few days rest. I'm somewhat confused as to what to do going forward. The Adamo saddle has helped me make a come back to DF bikes, but I'm not sure it's a permanent solution I will try to continue commuting on the Salsa and the Trek Mountain Bike. The latter is now equipped with studded winter tires. Also, if I'm up to it I will try to complete January's R12 on the upright. Paul has a new permanent route approved. I've ridden some of the sections with him while testing the cue sheet for accuracy. The route features a nice mixture of terrain and scenery. I am very much looking forward to riding it.

Nine down - three to go. Stay tuned.
Posted by Rando Joe at 8:57 AM No comments: