It's been almost three weeks since I took the plunge into the cycling minority of recumbent riders. I've logged a total of 272 miles on eight separate rides. I was hoping to have accomplished more, but the early spring weather in the east is somewhat limiting, at least for me. I know some hard core folks who will ride in practically anything. For myself I could never get motivated to go out and suffer through bitter cold or wet weather. In that spirit I passed on the 200k permanent because of rain and the threat of thunder storms. I am now facing a 200k brevet this weekend in Ohio. I'm traveling through the area en-route to Missouri and Arkansas. Since the ride fit my schedule I decided to sign up. I am plenty nervous about it because I feel like I've not trained enough.

Although, I am improving with the bike handling and climbing. I can manage a tough hill without weaving all over the road. I've become much more comfortable cycling on roads with heavier car traffic. I bought one of those little helmet mirrors, which I always used to think were kind of silly; amazing how ones thinking can change. Stopping and starting are feeling much more natural and best of all my butt muscles don't feel like stretched piano wire when I'm finished with a ride anymore. I am a long way from being 200k confident, but I'm hoping to get in one long 80 - 100 mile ride before departing this weekend. If I can mix in a few good hills with those miles, and not feel totally wasted at the end, that may provide the mental boost I need. The weather for the next two days looks tolerable. Tomorrow I'm planning on commuting to work and the day after I'll try for the long ride. Hopefully , that will see me through.

Stay Tuned!
Posted by Rando Joe at 7:09 PM No comments:

The Times They are a Changing! 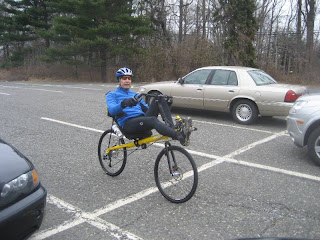 I've been cycling off and on for over twenty years. The off times were mostly due to nagging injuries that just wouldn't go away. I was facing one of those times now. My body had arbitrarily decided it no longer wanted to sit atop a bike saddle. I had significant plans for another full season, my fourth, of Randonneuring events, but now all of it was in jeopardy.

I had recalled riding a 600k in the Boston area a couple of years back and noticed a few recumbent riders on that ride. They were some of the last to finish. And, they looked painfully slow on the climbs, but they seemed to be having as much fun as everybody else. The thought occurred to me that perhaps I could ride one of those without the same physical problems I was having on the upright bike. After all, instead of a saddle these bikes sported huge reclining seats. The riding position was similar to that of my favorite Lazy Boy in the family room at home. Quietly, without a word to anyone, I began to research these strange looking rides.

The test ride and purchase

After numerous hours spent surfing the net checking the spec's of just about every type of recumbent on the market I decided it was time look in person. Thanks to Google I was able to locate a bike shop within a 45 minute drive that specialized in bent bikes. That is where I met Charlie, proprietor of New Jersey Bents in Hamilton Square. Charlie couldn't have been nicer. He told me to take one of the bikes for a test ride to see how I liked it. He pointed me to a Bachetta Strada and directed me to some quiet residential streets. I spent the next half hour bobbing and weaving around the neighborhood. This was definitely going to take some getting used to. When I got back to the shop Charlie asked me how I liked it. I replied "it was kind of hard to say for sure, but, I think I hated it". I also told him not to be discouraged because I'm probably going to buy one. True to my word I returned the next week and purchased a new Bachetta Giro 26. Thanks to feed back from a few bent rando riders on the national internet board, I was pointed toward this model as a sturdy ride that would go the distance. It was on the heavy side at 30lbs, but it had lots of gearing and disc brakes. I wasn't in love with the yellow paint job either, but to make the best of it I nicknamed it "Mellow Yellow". A rather appropriate name since I was sure to be slow as a snail and as nervous as a long tailed cat in a room full of rocking chairs.

When I returned with my van to take the bike home Charlie insisted I ride it around a bit to make sure everything was working okay. I spent an hour on the bike exploring the roads in the area. I was getting a little better with the handling aspect although I still was a little shaky on it. Starting and stopping was kind of weird. Also, I needed to concentrate to ride a straight line. At the end of the hour ride I felt as whipped as if I had just finished a 400k. It seems the muscle set used to ride this type of bike is not identical to that of my fully trained muscles used riding uprights. Just another thing to get used to.

With the weekend coming up a few of my riding buddies wanted to get together for a short ride. We were all signed up to be on the same fleche team this April so it seemed prudent to spend some time riding together. I had told them about my new bike purchase and the need to adapt to a different style of riding. They were encouraging and wanted me to join them on the ride. It would give us a chance to see how well a bent would fit in among a group of uprights. We met at the top of the Watchung Mountain Ridge in Summit, NJ for what was to be a hilly thirty miles. I realized that I had yet to climb any kind of hill and I would be facing a couple of good sized climbs on the ride. The most significant being the finish with a three mile twisty climb up Sky Top Drive. I started out doing okay on the initial short climbs, but it was not long before I started to tire. Climbing didn't feel bad but it was different from what I was used to. I couldn't get the same power to the pedals as I could my other bikes. I had done a lot of fixed gear riding over the last two years. I learned to stand and muscle up hills in a 70 inch gear. The technique needed here was the exact opposite. A small gear with high cadence was what worked best to keep a reasonable pace going up. Not being used to climbing this way I was tiring quickly. My friends were patiently waiting for me after every hill. When we finally got to the final climb up Sky Top I was so fatigued I was weaving all over the road sometimes actually crossing over to the oncoming traffic lane. Luckily it was light traffic and nothing bad happened, but I was plenty nervous having such a lack of control. When finally I arrived back at the parking lot at the top of the mountain I dismounted and could feel my butt muscles were as tight as a drum. It dawned on me that the glutes were the predominant climbing muscles used on a recumbent. My fixed gear riding gave me strong quads, but not glutes. Lots more training is needed here. Riding with others is fine on the Bachetta. The high racer design works well with other bikes. I was glad I selected this type of recumbent as it wasn't alienating from my riding friends. I enjoy the company of others on rides and have a strong bond with a small group of riding buddies.

The next weekend I felt I was ready to challenge myself for the first time on this bike. I decided to shoot for a 100k, mostly flat ride. From my home in central New Jersey there is mostly flat terrain to the south. I decided to head that way passing through the small towns of Kingston, Princeton Junction, Cranberry, West Windsor and Hamilton. It was quite windy making it difficult to keep a good pace at times. I had read that recumbent bikes were less effected by the wind, but I sure wouldn't have guessed by the way I was struggling on this ride. I finally reached the half way point and stopped for a Clif Bar. After the snack I began retracing my route back to home. The wind was at my back for awhile and it felt wonderful to be cruising along at good clip. Unfortunately, the joy was short lived as before long the wind shifted around and I found myself struggling again. It was getting colder as well making the last hour of the ride absolutely miserable. I was never more happy to make that final turn into my driveway. I was so beat I forgot to put my foot down in time to prevent me and the bike from falling over at the door to my garage. It was clear to me that I have a lot of work to do to build up my endurance on this bike. I have in the back of my mind to try a 200k permanent on the next weekend. I'm not at all confident I can complete such a ride but am considering going ahead with it anyway.

Stay Tuned!
Posted by Rando Joe at 5:39 PM No comments: