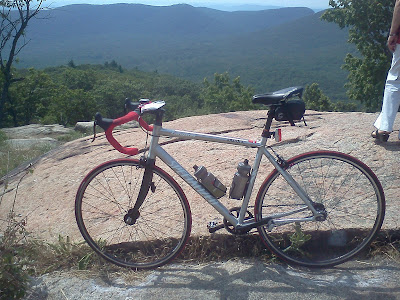 On December 19, while commuting to work, I unceremoniously rolled past the 14,000 mile mark for the year.  Just one mile later I would surpass my highest annual mileage total ever, which was set last year at 14,001 road miles.  The one difference this year is that every mile was ridden on a fixed-gear bike.  There was not a single gear shift nor even a second of coasting anywhere along the way.  Two weeks later, upon arriving home from work, on a chilly New Year's Eve, I would finish the year with 14,352 miles.

As I look back on the experience I'm not sure exactly how to feel about it.  I wasn't awed by the accomplishment, it was just another year of riding a lot.  I've had a number of those years. This didn't really feel any different.  It was like becoming a vegetarian, which I did many years ago.  I never missed the meat and I didn't really miss the gears.  But, if asked why I made the choice the only answer I have is that it raised the level of difficulty, presenting a greater challenge.

In reality, the fixie year was kind of a fluke.  Near the end of  2011 I was headed to Arkansas for a couple of weeks to visit with family.  I decided to take a bike with me. I selected the fixed-gear for it's low maintenance and simplicity.  Also, reasoning it would be great off-season training.  Unforeseen circumstances had me staying in Arkansas for the better part of four months.  I spent a lot of time slogging that bike up and down the Ozark Mountains.  I even traveled to nearby Missouri and Tennessee to sample the riding there.  It was all hilly terrain, but I was managing quite well without gears.  When I set a 200k PR on a hilly Missouri brevet I thought maybe I should just stick with this bike for awhile.  In early April I rode a pretty wet 300k, also in Missouri. That was followed by a 400k on the Natchez Trace Parkway in Tennessee. That represented my longest fixed-gear ride ever.  By the time I arrived home in May I was committed to finishing 2012 as it was started.  The geared bikes in my garage were gathering dust, but I wasn't changing horses anytime soon.

Back in familiar territory the brevet season was at full boil.  I participated in an early May point-to-point fleche from New York City to Westfield, Mass.  Our team of four riders, The Shiftless Vagabonds, were all on fixed-gear.  I rode a second 300k and 400k, locally in New Jersey.  At some point I realized I had three of the four components to the Cyclos Montagardes R-80 recognition.  The R-80 is a full brevet series with all rides completed within 80% of the time limit.  The 600k was the missing link.  To meet the mark I would need to complete the ride in under 32 hours.  For me that would require a straight through effort with no allowance for sleep.  The New Jersey East Creek 600k fit the criteria.  I would end up finishing the ride in 31 hours and 17 minutes.  That event also represented my 10th brevet series and brought me the Ultra Randonneur Award.  Yet, there was still more to accomplish as the Mondial and K-Hound awards were both in my sights for 2012.  I was constantly riding permanents of 100k and 200k distances to rack up the RUSA kilometers.  The numbers were looking good, but at some point I began to feel burned out.  All the riding, combined with working full time in a very busy bike shop (Knapp's Cyclery) was making the activity feel like a bit of a chore.  I needed a fresh perspective to keep things interesting.
I decided to take a look at what the UMCA had to offer.  The cross-state record challenge had appeal.  I found a rather soft record close to home in New Jersey.  I believed I stood a good chance of breaking it, even with the limitation of the fixie.  With the help of the bike shop I built up a new Specialized Langster aluminum frame fixed-gear.  All the components selected were light weight, designed for speed and durability.  As the crowning touch I ordered  a set of Roval 45 carbon wheels.  While getting the bike together I trained relentlessly.  Some of my commutes turned into time trials, with me using the Garmin virtual partner to race against.  On top of everything I needed to submit all the UMCA paperwork, design my route, find a fellow member to officiate, ready a support vehicle, and find a crew.  It all took much effort and energy.  It turned out to be the refreshing change of pace I was seeking.  On September 9th I broke the existing UMCA record for crossing New Jersey from East to West by over an hour and a half.  I even got to spend the day with family as my wife and son volunteered as the crew.  Fellow randonneur and UMCA member David Eisenberg officiated the record.
After the UMCA event I resumed the kilometer counting with renewed enthusiasm.  Sometime in October I hit the required 10,000 for entry to the K-Hound Club.  I was just one 600k short of having a second SR Series for the year.  Late season 600's are non-existent in the north-east.  If I wanted it I would have to travel.  Just prior to Thanksgiving my friend Paul and I went to Texas to participate in a 600k hosted by the Lone Star Randonneurs.  It was the perfect way to end the season with Paul acquiring the Ultra-Randonneur and a second series.  My finish earned me my 11th series and the Mondial.

I would still ride five permanents in the month of December, more out of habit than any other reason.  Despite having done hundreds of them, sometimes riding the same routes many times over, I still take pleasure in it.  The highlight of December was our NJ Randonneur holiday ride and celebration with 14 local riders clipping in for a 100k permanent.  At the conclusion of the ride we all ate, drank and socialized.  For all the lonely solo miles I've done the chance to mix with a group of friends is a solid-gold event.  I hope to do more of that in 2013.

The beginning of a New Year is a mixed blessing.  All that has been accomplished the prior year is erased. The goal setting, planning, and self-motivating has to begin all over again.  I awoke on New Years Day with zero miles.  Fortunately, that would only last a few hours before the first miles and kilometers of the year began accumulating.  There is much to decide about 2013.  Should the fixed-gear only mode continue?  I can only say that it will initially, but, I'm not sure about the entire year.  I do find myself gazing fondly at the carbon fiber multi-gear bikes which are neatly lined up at the bike shop.  I can't promise I won't give in to the temptation and end up with one of them.  Also, the much neglected tandem that sits in my garage is silently beckoning to me.  I am thinking I would like to find a stoker to share some of the adventures.  I could stand to cut back a little on the solo riding.

Although I've been cycling since 1984 I only have accurate records from 2006 until present.  In the past seven years I have logged 72,100 outdoor road miles.  I didn't know the number for sure until I totaled it all up on January 1st.  Should the last two years be an indication of future mileage I will then hit 100,000 miles in two more years. That will be the only goal I will set right now.  The rest of them will come along as the season approaches.  For now I need to ponder things.