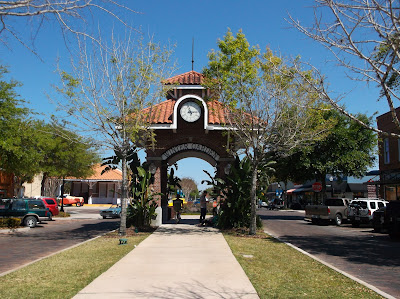 One grows weary of the winter in New Jersey.  By the middle of March there is a strong yearning for a change from the wind driven cold air which has become the routine.  Keeping double-century fit in this environment is no easy chore.  Besides desire and determination an expensive collection of winter riding gear is required.  All the while, a mere 1,000 miles to the south, folks are enjoying high temperatures of eighty degrees with bright sunshine.  WHAT ARE WE DOING HERE?  That is the question that reverberates through my brain as I ride a 200k permanent on a day in which the high temperature never rises above the freezing point.  Desperately needing a break I make the decision to enter the Central Florida 400k held in Eustis, just south of Orlando.  I previously attended the ride in 2011 and remembered it as enjoyable (blog report March 2011).

At 5am our group of 30 riders starts out from the front of the Comfort Inn for the first leg of 56 miles.  It's a cool 45 degrees with a light breeze.  The group quickly splinters with about six fast riders pulling ahead at a very brisk pace.  I settle in with the second group of about eight riders.  Some rolling hills present themselves early on as does one very steep kicker named Thrill Hill Road.  I maintain pace with the group, on my fixed-gear, by sprinting to the top ahead of everyone only to be re-joined on the downside.  I spend a lot of time at the front pulling through an increasing head wind.  We pick up a couple of riders who were dropped by the lead group.  The first glimpses of daylight begin just after 7am.  It is sometime later before the warming effect of the sun is noticed.  The skies are cloudless which will make way for a very warm afternoon.  By the time we reach the control the temperature has risen dramatically.  I spend time removing a layer of clothing and making a quick adjustment to the bike.  The group I was riding with departs a few minutes before me.
I leave the control alone headed for the Ferndale Preserve at mile 113.  The force of the wind is felt a bit more at this point.  Fortunately, I have lots of practice pushing through it on my own.  The terrain on this section is pretty mild so far.  However, from prior experience I know it gets a lot tougher.  The temperature keeps creeping up, along with the wind.  Twenty miles into it I stop at a store to top up fluids.  It's a long way to the control and there is nothing in between if this opportunity were passed.  As I head out another rider with the same idea pulls in.  I maintain a steady clip, but pass no one and no one passes me.  The real hilly stuff arrives with the appearance of Buckhill Road, a roller coaster with several good lumps.  I hit my highest speed of the ride, thirty-seven, on one of the downhills of Buckhill.  Legs spinning furiously as the road pitches back up for the third time scrubbing off all my momentum requiring another tiring grind to the top.  Shortly after finishing that torturous stretch of road I am faced with the single most significant climb up Sugarloaf Mountain.  I start to feel very hot on the way up and check the Garmin to see the temperature has risen to ninety degrees.  Once done with the mountain a more moderate four miles delivers me to the control.  I arrive to see everyone I was riding with earlier gathered around the food area.  My needs are minimal at this point.  I top up my fluids and head out without any further delay.  I munch on a Clif Bar as I pedal away.  I look back to see no one following me out.  I reason that a single rider on a fixed-gear will likely be caught by a large group of riders with gears. 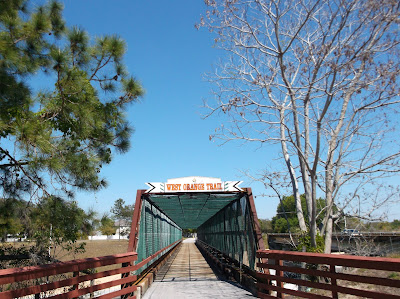 After just a few miles Buckhill Road is repeated in the opposite direction.  It feels about the same as the other way.  After some milder miles on county roads I am directed onto a bicycle trail which is followed for 22 miles.  The West Orange Trail is a wide recreational path which is mostly flat with some shade.  It passes through the towns of Wintergarden and Apopka.  It's not particularly crowded and I am able to make good time through it.  About half way through I see a rider, who appears to be on the brevet, fixing a flat.  I ask if everything is okay and am assured that it is.  I continue to the exit of trail.  Back on regular roads there are ten miles of somewhat hilly terrain to be covered before the control.  I manage a good pace with the help of some favorable wind and arrive at the Citgo Mart in Tangerine, Florida.  I'm refilling my water bottles when the guy who was fixing the flat comes in.  We chat for a minute.  I tell him I'm ready to go and that he should be able to catch me on this next leg.  As I pull out to the road a large group is on the way in.  Again, I imagine they will catch me before the next control. 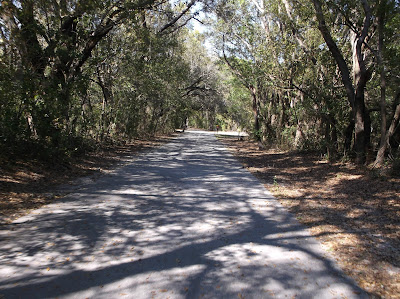 The route does a lot of doubling back on itself, sort of going around in circles.  I notice that some of the roads and intersections I've been on before.  Mostly going the opposite way.  I am directed back to Sugarloaf Mountain for a climb up from the other direction.  It's a bit shorter and steeper this way, but presents no problem.  When not climbing one of the bigger hills the route is mostly rolling.  I'm able to maintain a pretty good rhythm on these type of hills.  There is no sign of anyone coming up from behind, which I find surprising.  Daylight begins to run out necessitating a stop for night gear.  I use the sidewalk where there is a fence to lean my bike against.  It takes about five minutes before I'm underway again.  Given the clear skies all day I expect the air will cool considerably with night fall.  There is one control before the finish at mile 221.  I'm making a bee line for it.  At this point I don't want any riders catching me.  I've ridden most of the day alone, I am happy to finish it that way.  With full darkness the bottoms of hills are cold spots where I feel quite chilled.  Climbing up to the top of hills feels warm and I relish it.  I arrive at the control, in Mascotter, Fl, realizing I need to add a layer of clothes as well as my long fingered gloves.  I take a bit more time than at other controls and two groups of riders arrive while I'm there.  By the time I depart I estimate there are about a dozen milling about.  There are thirty miles to the finish.

The first few miles feel a bit chilly despite the additional clothes.  Soon enough my internal body heat rises enough to make me comfortable.  In keeping with the idea that I don't want anyone catching me I amp it up a bit.  The rollers continue and I am in tune with them.  There are some long stretches of six to eight miles on dark lonely roads.  I particularly enjoy this type of isolation when night riding.  For me these moments are the highlight of the ride.  Not that I don't like being around people, but sometimes it's fun to feel like the only one on the planet for a little while.  I keep my pace and occasionally look back for bicycle head lamps only to see more darkness.  My Garmin occasionally chirps reminding me of upcoming turns.  Everything flows perfectly, almost effortlessly.  When the rural setting gives way to a more suburban area I am only a few miles from the end.   I give what I have left in my legs to cover the remaining distance quickly.  In short order I am at the front of the hotel.  I ride through the automatic opening doors into the lobby where the organizer, RBA Paul Rozelle, and a few riders are waiting.  Paul is indeed surprised to see me this early.  He tells me that there are lots of good riders behind me and only five have finished so far.  My time is 19 hours and 22 minutes.  I eat two slices of pizza before any other finishers arrive.  Just maybe I'm starting to get the hang of this fixed-gear thing.


A travel event is a thing to be treasured.  Riding a familiar distance in a not so familiar venue heightens the experience for me.  Although, I rode this 400k mostly alone I was never bored as things were so different.  The weather, the scenery and most everything about the Central Florida region was not what I am used to.  I've done my share of traveling around to brevets and have relished the nuances of the different regions.   I marvel at the ability of RBA's around the country to come up with routes that are safe, interesting and unique.  Typically, the course design will intentionally feature some of the most interesting terrain and scenery a particular region has to offer.  The Florida route passed by orange groves with ripe fruit still on the trees.  There were pristine lakes with steam coming off the water in the early morning hours.  The beautifully maintained West Orange Trail is a testament to the quality of life in the area.  It is a further testament to the well being of randonneuring in Florida when thirty riders line up on a chilly March morning to undertake a 400k.  It was worth the effort to travel there and I would do so again without hesitation.  Thanks to RBA Paul Rozelle and his crew of volunteers for a great route and a well organized ride.